Citroën’s latest electric launch is called the ë-C4 and it is the zero-emission version of the Citroën C4. In this video test we want to answer three fundamental questions: what is the difference compared to a conventional C4? Is it a better buy than rivals such as the Peugeot e-2008 or Volkswagen ID.3? And the most important question: Is the Citroën ë-C4 a good electric car? In this test we will analyze your interior, its habitability, dynamics or benefits, so that you have no doubts if you think buy a Citroën ë-C4.

Video test of the Citroën ë-C4

Then the video proves.

Photos of the Citroën C4 and ë-C4

How is it different from a Citroën C4?

At the design level, the Citroën ë-C4 is a car very similar to other Citroën C4s. Just change your specific “Iceland Blue” color and aerodynamic cut 18-inch wheels diameter. If we are even more observant, we will discover some blue moldings on the front and side – in the characteristic airbumps – and some emblems that designate this version. You have to normalize the electrics, and the ë-C4 does it perfectly. Before going inside, remember that the Citroën ë-C4 is not a completely “pure” electric.

The Citroën ë-C4 is based on the well-known CMP platform of the Stellantis Group.

It is developed on the same platform as the C4 with internal combustion, but this time, that is not a problem with regard to the interior space of the vehicle or its interior quality. Fortunately, it has the same perceived quality of a thermal C4 – a high perceived quality, far superior to that of a Volkswagen ID.3 – and its interior roominess is identical. Even the boot retains its same 380 liters of volume loading. As specific details, just change a few moldings and the menus of the infotainment system. 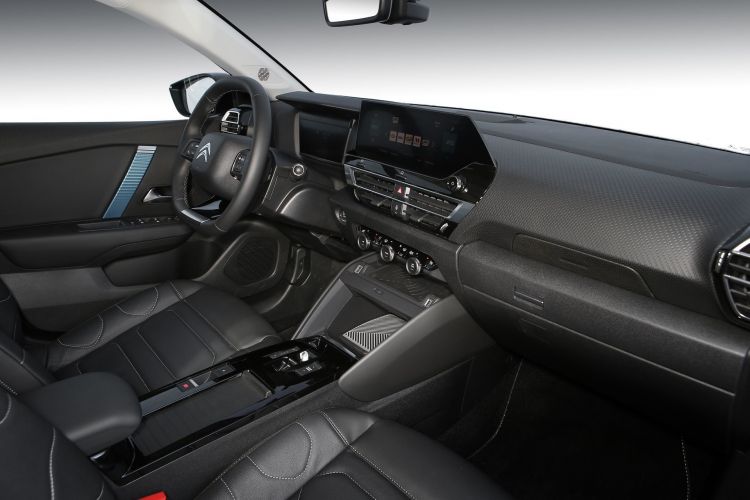 The ë-C4 has a spacious and well-used interior, with curious details such as its double glove compartment or its support for tablets, and details that we no longer liked so much in the C4, such as a small digital instrumentation or a great abuse of plastics ” piano black “.

How does the ë-C4 position itself in relation to its rivals on a technical level?

Among the direct rivals of the Citroën ë-C4 are the Peugeot e-2008 – with which it shares an electric motor and platform – and the Volkswagen ID.3, as well as the Hyundai Kona electric, Mazda MX-30 or Kia e-Niro. In this table you can find their main differences with respect to their most direct rivals. 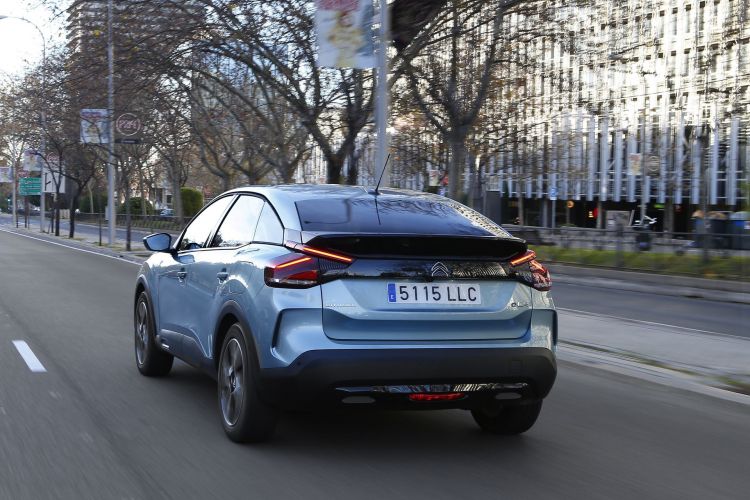 With a 50 kWh battery capacity, the e-C4 certifies a WLTP range of up to 352 km in combined cycle. For its part, the Peugeot e-2008, with whom it shares a battery and an electric motor, approves a somewhat lower range of 325 km. In return, it is considerably faster at 0 to 100 km / h. The Volkswagen ID.3 equivalent in price, with a battery of 55 kWh of gross capacity, approves an almost identical autonomy, being somewhat faster in performance. The electric Hyundai Kona, with its smallest battery, is below all in both performance and autonomy.

At the wheel of the Citroën ë-C4

What strikes me the most at the wheel of this electric car is its openly comfort-oriented feel. It is a quiet and refined car in itself, and if we add to that the silky operation of an electric motor, we have one of the quietest driving experiences in existence. To this is added the suspension of progressive hydraulic stops, which, without reaching the legendary comfort of the hydropneumatics of yesteryear, filters really well the bumps and irregularities, giving priority to the comfort of the passage. 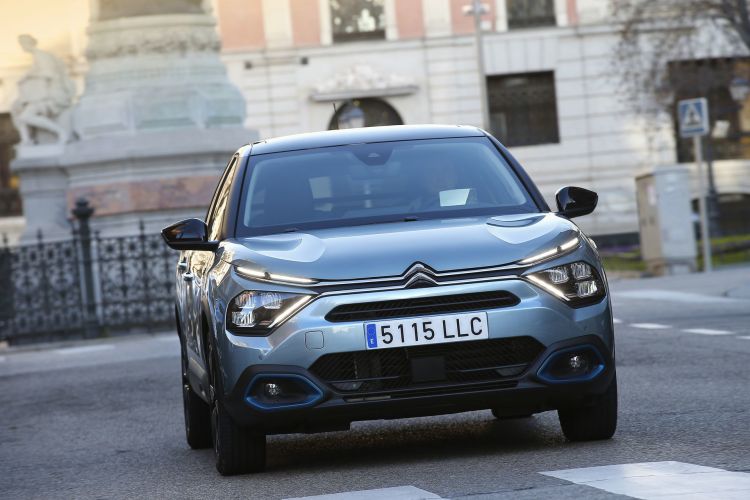 Progressive hydraulic bump suspension smoothes the car’s response in bumps, but it’s not a revolution.

And yet, it is not a slow car or lacking in features. Its 136 hp are noticed when we step on the accelerator hard and the car gain speed with force up to 100 km / h. Personally, it seemed to me that it has more “bellows” than a higher power Volkswagen ID.3, at least from 50 km / h. Of course, forget a good containment of the roll in curves or an informative address: it is a car with an absolutely filtered touch – if you like to drive, the Peugeot e-2008 will be a much more recommended option.

Finally, we want to mention that the average consumption of this Citroën ë-C4 during the test was about 18 kWh / 100 km, and it rarely went above 20 kWh / 100 km. Therefore, it is a car of good efficiency, and that can be approached to its homologation in realistic conditions.

We have not yet talked about recharging the Citroën ë-C4 batteries. The battery charging of 50 kWh gross of the Citroën ë-C4 is possible at powers of up to 100 kW in direct current, in which case, reaching 80% charge will take us just half an hour. Using a 7.4 kW home charging point, the full charging time would amount to 7.5 hours. If we charge it in a 3.6 kW outlet, we would go to about 15 hours, but this will be the most affordable option and indicated if we want to charge it daily in our garage. 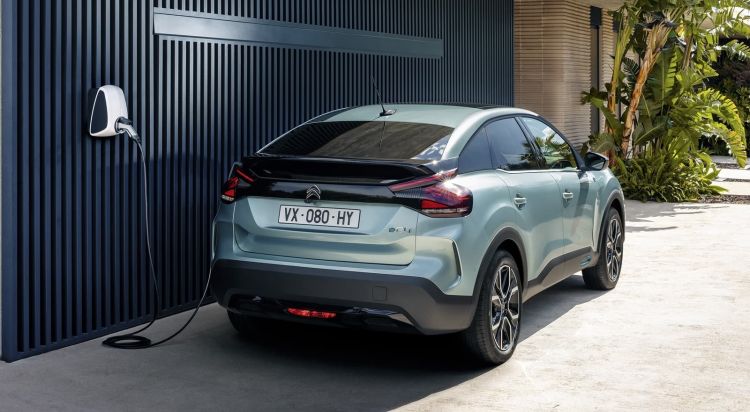 Is it a good electric car? Citroën ë-C4 test conclusions

Before we come to the conclusions, let’s see how much the ë-C4 costs, assuming that we take advantage of the MOVES III Plan and scrap a vehicle that is at least seven years old.

The Citroën ë-C4 is one of the most affordable electrical alternatives on the market in its category. Of course, once we apply all the available discounts. It is a short distance from the Peugeot e-2008, whose equipment in the Active version is similar, even though it is a car with quite different positioning. As has been demonstrated in this test, the Citroën ë-C4 is at the level of its rivals in performance and habitability, standing out even in energy efficiency and also in interior and cargo space.

The Citroën ë-C4 is already on sale. 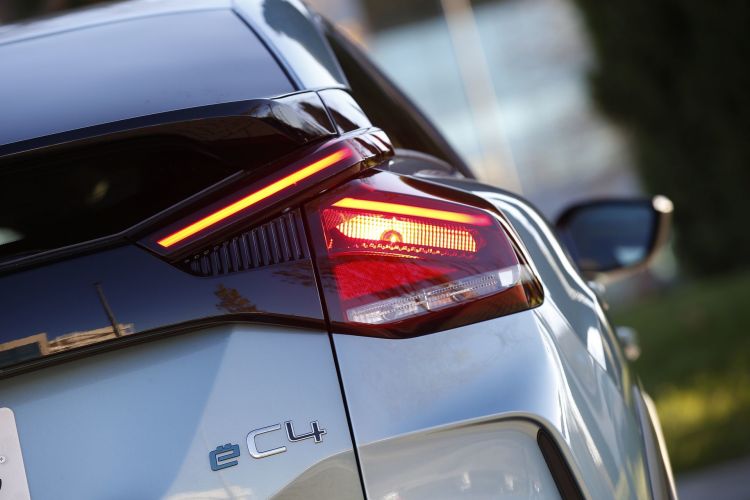 One of its keys is to have been developed together with the thermal C4, and to have been equipped with a marked personality. In a market where everyone wants to be dynamic and sporty, the ë-C4 is committed to comfort and refinement. The ë-C4 convinces as an electric car, and on the surface it could go completely unnoticed in traffic. It feels no different than a thermal car, and that’s good news. for the expansion of the electric car. It is also one of the most affordable electric vehicles, as long as we adhere to the MOVES III Plan.

Otherwise, drag a surcharge of about 10,000 euros compared to a Citroën C4 with internal combustion. With respect to rivals such as the Volkswagen ID.3 or the Hyundai Kona electric stands out in price, but it does not have versions with greater autonomy and battery size, something that the German and Korean can boast about. If you are interested in buy an electric carWe recommend that you read our buying guides in What Car I Buy, where you can also find the best deals on cars such as the Citroën ë-C4. 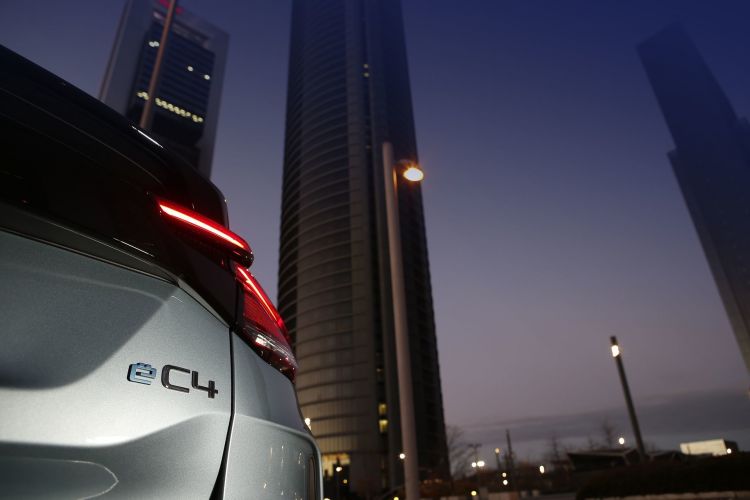 Photos of the Citroën C4 and ë-C4