Imagine that you are in the late 60’s, you are a successful casino magnate with a strong penchant for automobiles and you strongly desire a four-wheel drive Ferrari, something like a Purosangue before that idea was “ accepted ”by enthusiasts. However, sports SUVs have not yet proliferated, the idea has not even come into existence, so you only have the option to build one yourself. You do it and you call it Jerrari. Well, this Frankenstein is real and this is his story.

Once upon a time, car manufacturers used to focus on one area of ​​expertise. For instance, Ferrari it built high-performance sports cars and luxury coupes for the wealthy. The idea of ​​the Italian firm making an all-terrain vehicle was ridiculous, back then. When the American businessman Bill harrah Enzo himself requested it in 1969, the Patriarch of Maranello flatly refused. So Harrah set about building his own, having his mechanics combine the stylish face of a Ferrari 365 GT 2 + 2 with the practical set of a Jeep wagoneer, both from 1969. 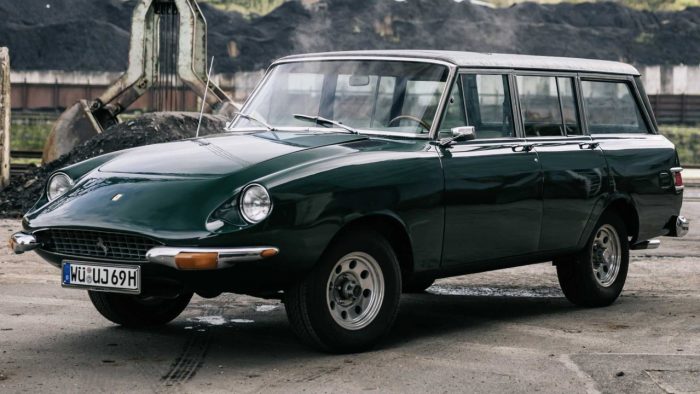 The result was the enigmatic Jerrari. The history of the vehicle has become confusing over the years, as each subsequent recap varies on a few minor details. Hagertyhas one of the clearest stories, describing not only the Jerrari himself, but also his successor, the Jerrari 2. Most narratives agree that the horse donor was selected when one of Harrah’s mechanics crashed him, donating his V12 engine and front end to the project. Harrah had a great team responsible for looking after his collection of 1,500 vehicles, being able to do the construction in-house.

Originally, the Jerrari used the 4.4-liter V12 heart of the 365 GT 2 + 2 (Type 245), which generated 320 hp and 363 Nm. The four-speed automatic transmission was replaced by the Ferrari one for packaging reasons, while the crankcase was modified to make room for the front differential. Because yes, the Wagoneer’s four-wheel drive system remained intact, as did the brake and suspension kit, except for the Monroe shocks. Ultimately, both the 365 GT 2 + 2 and the Wagoneer are body-on-frame vehicles, making things somewhat easier. 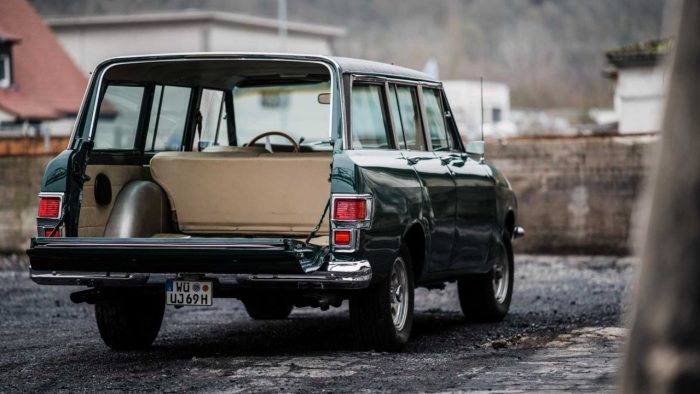 Finished in a tone similar to British Racing Green, the car features many nods to its bastard nature, from “Jerrari” badges on the rear with Ferrari lettering to a custom logo of a rampant kangaroo up front. On board, we also find the steering wheel of the original gran turismo together with the pedals to get that purely Italian feel. Imagine showing up at a Ferrari or Jeep enthusiast event. You would receive tons of questions about this strange, but historical construction, regardless of how attractive it can be.

In a contemporary proof of Road and track, journalist Ron Wakefield noted that fit and finish were of the highest quality. However, he cited driveline vibration issues and insufficient braking ability, as well as gearbox issues that prevented the V12 from spinning the wheels in first gear. The resulting vehicle was perhaps more interesting than a genuine high-performance off-road vehicle, with high speed stability issues cited that prevented Wakefield from exploring the vehicle’s capabilities beyond 200 km / h. 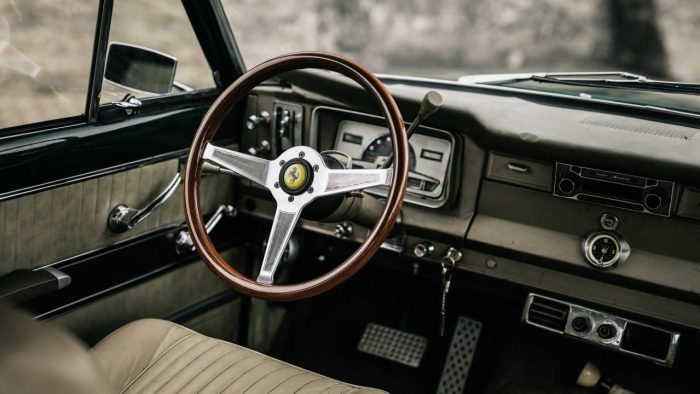 In the mid-70s, Harrah ended up ditching the V12 and putting it in a 1977 Wagoneer as he began to tire of being recognized by everyone in the flashy mashup. This vehicle would be known as the Jerrari 2, although on the outside it looked like a strictly stock Jeep Wagoneer. The original Jerrari received instead a Chevrolet origin 5.7-liter V8 with 300 hp and 515 Nm, an engine that was reportedly far more usable and nearly as energetic as its 12-cylinder counterpart, though with some logic lacking that magical Italian charm.

After Harrah’s death in 1978, the Jerrari changed hands. It appeared on Ebay in 2008 and is currently located in Germany and has a license plate, so and it is legal to use it on public roads in the European Union (EU). We say this because, if you want it, you could get to adopt it in your garage. It is for sale in Classic Driver with ridiculously low mileage. Unfortunately for anyone interested in this Frankenstein, the seller has not mentioned how much he wants for the unofficial grandfather of the impending Purosangue.