In many towns around the world we can take a walk through the old town aboard a classic car. A tourist service that is increasingly in demand. Tours different in emblematic vehicles with drivers who exercise tour guides and that sometimes we can even drive.

From walks of one or two hours, to the full day is what this type of guided services offer on average. In the case that we drive ourselves, they usually include compulsory third party insurance, as well as assistance to the driver and passengers. In addition to the payment of a deposit that is usually around 600 euros, depending on the car model. In short, they are the usual rules of rental services.

The services of tours with a driver, who act as a guide and are the most common, usually come from people who have decided monetize your passion for collecting of classic cars. Some of them, who have already tried renting their colorful models for events, such as weddings or parties, are now expanding their business towards these tours tourist with retro flavor.

If there is a classic car that identifies with a walk through the center of Madrid, that is the Seat 600. In the capital there are various companies that offer both the possibility of touring the Monumental Madrid or the Country House in a tour Guided, with a driver, or driving ourselves in a group. It is also possible to rent the vehicle on our own with current tools, such as GPS, to guide us through the different routes. All of them enlivened by cassette music from the 60s and 70s and souvenir photo album.

Some of these companies allow customize routes both in time and in route and number of vehicles. In the case of the company 600 Tour Madrid, They have in their catalog tours of towns near Madrid such as Chinchón, Aranjuez, El Escorial, Guadarrama, Buitrago or Patones. And to make the trip more authentic, it is done by regional and old national roads. It is worth highlighting from this company the cultural tours such as the “special centenary shops and taverns”, the “historical murders and crimes tour” (with stops where legendary crimes were committed) or the “tour First Dates “ for travelers who want to take advantage of the trip to meet other people.

In the case of the company Trip Troop Vintage Tours, that operates with its Seat 600 also in Barcelona and that has just reached a collaboration agreement with the veteran Madrid Road Trip to settle in the capital, he has his cars interconnected with a public address system Through the vehicle radio for group tours, in such a way that the guide’s explanations are heard in all cars. In addition, being a company based in the La Latina neighborhood, they have permission to circulate through Madrid Central.

In addition to the 600, we can visit Madrid with another classic of the industrialization of the sixties. Vintage Tours in Madrid offers us the possibility of getting on an authentic Seat 1500 taxi of those years. Another initiative in Madrid is Vintage City Tours, that offer rides in a car that, although not old, has a retro design inspired by the typical cars from the 30s, but with modern mechanics, more comfort and propulsion by liquefied gas.

In Barcelona, ​​the 600 was also an emblematic car; they were produced right there. The company Trip troop offers cultural and artistic routes in 600, which include a stop for an aperitif. “Gaudí Tour” and “Monjuïc Tour” are two of their best offers. Another good way to visit Barcelona is in a Russian Ural motorcycle with sidecar. Barcelona Sidecar exploits the possibility of sightseeing on these retro motorcycles that, although recently built, recover the model of the Second World War. In Valencia, Event cars is a company specialized in renting classic cars for events, but it also organizes with them tours with driver through the city and through the Albufera.

An island like Mallorca, with its roads cutting spectacular coastlines and its Tramuntana mountains, invites you to be traveled with classic convertibles. Models like him Volkswagen Golf Cabriolet, the Triumph TR6, the Volkswagen Beetle or the Corvette c3 are some of the proposals of Mallorca Driving to visit the island in a different way and driving ourselves.

In Castilla y León and Castilla-La Mancha you can do one-day or weekend routes visiting cities such as Segovia, Ávila, Toledo or Cuenca with the cars of Classic Car Rental, that offer us the car for rent without a driver and provide us with a Road book with a detailed selection of picturesque roads, incredible landscapes, interesting places, recommendations for where to eat and accommodation.

Prague It is one of the European capitals that offers the oldest vehicles for these tourist tours. There are several companies that work with cleverly restored classic cars from the 20s, 30s and 40s on offer in the old town. One of them is History Trip, that has models of the Prague AN and Prague Alpha, both from 1929 and a replica of a Mercedes Benz 770 from the 1930s. Another company, Prague Old Car, visits the city and also nearby areas, for this they have two legendary models, the Ford T and the Ford A. It is also possible to get on old Škoda from the 60s. 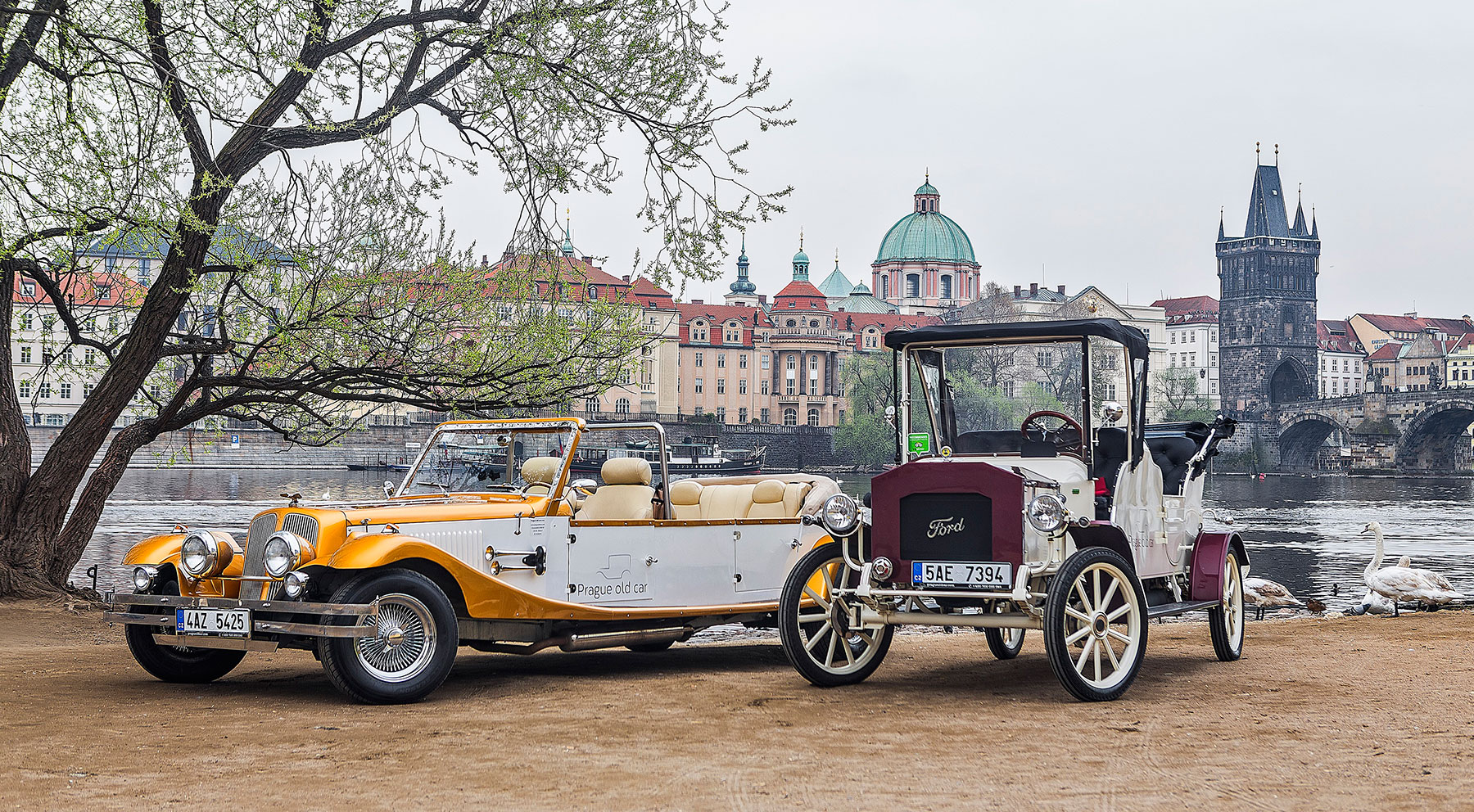 It would be strange that in a city as touristy as Paris, capital of one of the European countries most linked to the production of cars, we would not find tours in classic vehicles. The company Paris Heritage Tours offers its services in a luxurious Citroën DS 21 Pallas Limousine convertible from 1973, leading to a minibar. Other initiatives allow you to see the city from the emblematic Citroën 2C, such as 2CV Paris Tour or 4 Roues Sous 1 Parapluie, whose services extend to other locations, such as Bordeaux. In the case of Paris Tours City Wheels, we can get to know the city in an authentic Citroën Traction Avant (also known as Citroën 11), a classic of the French company of the forties and fifties, which was considered “The car of the century” thanks to its revolutionary front-wheel drive and that paved the way for the mass production of vehicles equipped with this technique.

In London it is enough to get into one of its classic taxis, the Austin FX4 or the LTI TX4, to be mounted on a vehicle vintage, but there are also tours to use to take a ride in a classic car. Such is the case of Small Car Big City, a company that makes these visits in Classic Mini Cooper. One of its star products is visiting all the locations of the movies of Harry Potter. On the other hand, it is possible to visit the city in another English classic, the Morris Minor convertible, via Classic City Tour.

A Citroën Traction Avant in Paris.

Rome It is another of those cities with a lot of history to which it is good to add a little more through the classic Italian vehicles. Rent one Vespa to tour the city, in the style of Audrey Hepburn and Gregory Peck in Holidays in Rome, It is already a classic offer and to it we must add initiatives such as Vespa tours with sidecar, tours in Ape Calessino, that endearing motorcycle car that was born in Italy, but that triumphed in Asia, or the proposal of Rome 500 Experience with their tours themes aboard colorful FIAT 500s.

Also in Italy it is possible to travel Florence, Pisa, Siena and other parts of the country with the company Slow drive and a whole range of great classics like the 1959 Alfa Romeo Giulietta, a 1965 Lacia Flavia convertible or a 1966 Triumph Spitfire MKII, among more than 30 other options.

Lisbon, In addition to its beautiful old trams, it also has tours to tour the city with retro vehicles, such is the case of Lisbon by Beetle, that proposes to visit the Portuguese capital and other surrounding cities, such as Sintra, aboard convertible Beetles.

In a city like Berlin could not fail a route in Trabant, a historical emblem of the cold war era in the city. On Trabi Safari, they have several models to test. Continuing in Germany, the Nostalgic company organizes tours of the country aboard German classics, such as the Mercedes-Benz SL or the Volkswagen Beetle convertible. Their experience has made them extend their tours to France and Italy.

In neighboring Poland and specifically in Warsaw, there is the possibility of hiring a car tour vintage through the company Warsaw Behind The Scenes. For this they have FSC Zuk minibuses from the communist era. Another proposal is that of WPT 1313, offered from tours on Jelcz 043 buses, known as Ogórek (‘cucumber’) to Polish Fiat 125 taxis. The FSC van Nysa 522 It is another of the emblems of ancient Poland with which we can visit the capital of the country.

‘Tours’ in the rest of the world

These initiatives extend to practically every corner of the planet. It’s easy to think of Cuba and the almendrones from the fifties that can be hired in Havana, but we will also find initiatives in Asia, such as walks on classic Royal Enfield motorcycles from Vintage Riders in India and other neighboring countries; in America, like Drive Vinty, that operates only in the United States and that has in its catalog models such as the Cadillac DeVille, the Buick Electra, the Ford Mustang or a DeLorean; or even in New Zealand, where the Hooters company offers tours in cars from the 1920s around various parts of Hawke’s Bay. Finally, it is worth highlighting the digital platform Book a Classic, a web portal that allows classic vehicle owners to contact clients who want to rent them for any event or trip. The website indicates that they have more than 4,000 vehicles available and in more than 35 countries.