At first glance, we could say that the similarities between a Ordinary Japanese taxi and a classic Ferrari they are quite limited. The smartest could say that both have four wheels, an internal combustion engine or a steering wheel that, what a coincidence, is round in both models. But no, we are not referring to whether they share such general characteristics, but to a very specific detail.

First, let’s put the referenced models in context. On one side of the quadrilateral we have Nissan cedric, a Japanese E-segment saloon that has proudly served as a transportation vehicle in its homeland since the 1960s and has lived through a total of nine generations for 44 years. If there is one to highlight, that is the seventh iteration of the model (Y31), since it was in production from 1987 to 2015 with hardly any changes thanks to its balance between price, space, maintenance, performance and quality.

Logically, that attracts the vast majority of taxi drivers, which is why it was on sale for so many years, even when its substitutes came later to the general public. It was also very valid for business fleets, both for the lowest and highest ranks, since Nissan offered an extensive list of options ranging from air conditioning and rear seat headrests, to a TV tuner with a Sony CD player along with speakers courtesy of JBL.

At the other extreme we have Ferrari 500 Superfast, presented at the 1964 Geneva Motor Show. It was the latest from the signature of the horse Front-engined ramapante for those who appreciated comfort and performance. This beautiful and elegant 2 + 2 coupe built by hand was bought by entities such as the pilot John Neumann, Prince Bernhard of the Netherlands, the Shah of Iran, the British actor Peter Sellers or the playboy Gunter Sachs. And that the price was almost double compared to the 250 GT / L “Lusso”.

Of the only 36 examples of the Ferrari 500 Superfast built, only eight were right-hand drive, making it, hands down, one of the rarest V12 coupes of all time. But not only the body had evolved with respect to the popular 410 SuperamericaAlso its 5.0-liter V12 engine, which for the occasion could produce 400 hp and reach a maximum speed of more than 280 km / h. Thanks to its comfortable and spacious interior, its great engine and its incomparable exclusivity, it was the king of the road.

However, although the two models were representatives in their respective fields, the truth is that we can draw little resemblance between the Nissan Cedric and the Ferrari 500 Superfast of the 60s. But it turns out that there is a strange and frighteningly practical characteristic that very few models share And among that very limited set of cars are the old Italian sports car and the Japanese taxi. Do you want to know what that strange feature is? Here it is: opening the passenger doors remotely (and mechanically).

In other words, a way to open the doors for a passenger without touching their handle. And no, you haven’t read it wrong. Both an exquisite-looking V12 designed by Pininfarina, the most exclusive Ferrari of the era, and a serious and humble rectangular Japanese workhorse, the possibility of mounting a remote opening system was offered. But not electrically as we would now find in a modern vehicle, but through a system composed of a lever that is operated through a cable that makes life easier. 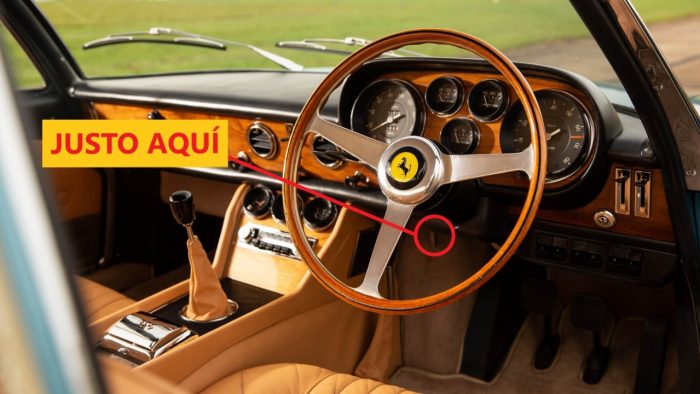 Taking the Ferrari, there is a small lever under the dashboard, either to the left or to the right of the steering wheel (depending on the market). Pull that lever I would release the latch and open the passenger door a little, saving the Ferrari driver from the indignity of having to lean over the center tunnel and open the passenger door like some kind of filthy animal. Whoever had money to buy a 500 Superfast, could not perform such actions, as a poor man who goes to work in a simple general-purpose car.

However, from what it may seem, it was an optional element that belonged to the package say Lusso. In the Nissan Cedric it also makes some sense, especially considering that many of the Japanese drivers are quite polite, and on a rainy day, for example, they would go to the trouble of open the passenger door from the inside, without the customer having to waste time pulling the handle or the driver having to go outside to open it. It is at least curious, right?