While today’s mid-engined Chevrolet Corvette (C8) is a very different machine than the one designed by Harry earl in the early 1950s, the then vice president of design for General Motors (GM) never expected that this lightweight sports car created to compete with the roadsters Europeans would forge the legacy it has, and will continue to build. However, the Corvette, or at least in concept, could have come much earlier.

Instagram account GM Design, the department in charge of shaping the American giant’s vehicles, is packed with insightful posts on the company’s long history, and luckily has decided to share some wonderful classic car sketches that Earl kept secret in one of his albums. These are some GM designs that never made it to production in the 1930s and early 1940s, personally, one of the best times in automotive design, the era of art deco.

The collection of these five sketches shared here are some of the earliest examples of many works of art belonging to the GM Design Archive & Special Collections. Designs that arrived long before the proportions and the different safety regulations and of each government conditioned the product, machines designed for the simple fact of being attractive. And in those days, designers managed with nothing more than a piece of paper, some pencils and charcoal and your imagination, the best the town could have.

The sketches reflect the quirky but emotional trends of the time, with nearly infinite hoods, chrome throughout, and prominent wheel arches with a gentle drop to the rear. And the level of detail of the sketches is also more than remarkable, much more graceful than what most brands offer today. Wonderful drawings that did not necessarily come from Earl himself, although the designers who signed them worked with him, so they can be seen as the contemporary idea of ​​what the father of the Corvette could have been. 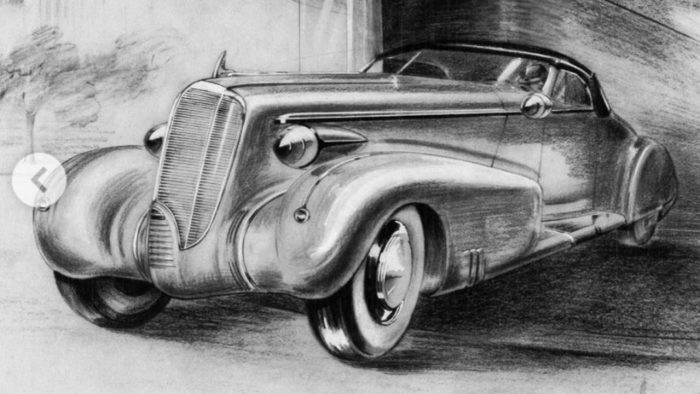 It should be noted that these designs came a lot before cars started to be described as “clinical”. None of the sketches are short on character, and while it’s safe to say they fall short of modern safety standards, they represent a truly treasured era of automotive design. Few drawbacks can be taken from these designs, whose sole purpose was to be seen and enjoyed. In addition, it was the time when a new concept began to be taken into account and would condition future designs: aerodynamics.